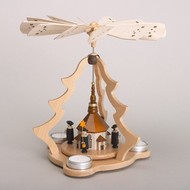 Included in the fun facts about German Pyramids are that they are powered by natural forces and do not rely on any electrical input. With Mother Nature as a power source, they can be placed anywhere around the home or even outside with no worries about supplying power to them.


The origins of the German Pyramid date centuries back to the 1500s. In the early years the idea came about from the windmills that were used in the mines around the Erzgebirge Mountains. Here the wind mills were used to pump water. Around Christmas time many of the local folk would place evergreen branches on them to make them fit the seasons.


By the 1800’s the Christmas pyramid was a common site not only in the Erzgebirge Mountains but all across Germany. Because the winds of the mountains were not present in other parts of the nation, candles were substituted so the fan at the top would turn.


The use of evergreen branches was eventually replaced by paddles. The many Christian symbols used to help the followers of Christ to celebrate his birthday were added to make a Nativity scene. This include nativity scenes along with German carolers soon became popular. Some of the Christmas pyramids tell the story of Jesus birth. This is the purpose of the many different levels they now contain.


The original German pyramids used in the Christmas celebrations were small enough to be taken into the residences home. In time many towns embarked on the projects for a construction of large German pyramid to help the town celebrate this joyous occasion. Today it is not unheard of for some outdoor pyramids to stand 6 meters tall or about 20 feet high.


The reason for the name to be given this structure as a pyramid is that they are named after the famous ones in Egypt. This came about because of Napoleon’s attempt to conquer that nation. Many of the solders came back and saw the resemblance to what was being used around Christmas. By that time the German Pyramid was used over most of Europe.


Candles were the second source of energy used to propel the fan positioned at the top of the pyramid after the use of mountain winds was no longer deemed to be reliable, but then came a third which helped to spark and even wider use of this Christmas decoration. This was the use of Kerosene lanterns to create the heat that would circulate the air. Candles back in the 1800 and 1900 were expensive but kerosene was relatively cheap. This supplied the power to turn the many different levels the German pyramids have grown into.


While today most of the Christmas pyramids are still referred to as German Christmas pyramids, their enjoyment and use can be found around the world where ever there is a Christian community. This can be elaborate structures or the simple one with 4 poles and tree branches attached to them. It is the celebration of Jesus birth that is important at this time of year.

My grandchildren love my German Pyramids that I display each and every holiday season. I have two of them that have been with me for decades now. While they are old, they still look like new. This is in part because of the craftsmanship put into each one when it is being created. I also [...]

German Pyramids use a special sized candle so the heat need for motion of this pyramid is applied correctly. For use in this type of Christmas decoration, the use of the candle is not for decoration purposes. The heat that rises from the candle is used to propel the pyramid fan when the rising air [...]

The German candle pyramid is an ornate piece of artwork, which uses the heat a candle generates to rotate a fan, which will then move delicately carved figurines and images around in a circle. There are several other names used to describe candle pyramids, including: German pyramid, candle carousel, lightstocks, Windrädchen and table whirligigs. All [...]