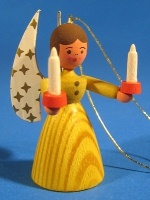 Have you ever wondered what the story is behind the angel figurines, where they came from or what they represent? If so, then this story will interest you. It is one of many myths relating to the background of the angel figurines. It all begins with an angel named Karl.

In a place far away in the country of Germany, lived a clever angel named Karl. Karl was a special angel known for his musical talent. He preferred to stay alone, confined in his cute, rustic cabin but his love for music drew him out of his sheltered existence and into the nearby town of Glauchau. He had hoped that in coming to the small town, he could somehow find a way to enjoy his musical hobby. He played the violin and the flute and had learned to play the piano when he was younger. In fact, it was his favorite instrument; however, there was no room within the cottage for a piano.

Dejected, he set out for the town one day, wishing he could somehow find a piano to play, a talented musician to meet, something. Walking through the center of the busy town, he was reminded again of why he liked the solitude. Screaming children, boisterous men, and women with high-pitched voices attacked him in waves with each step he took. He forced himself to go on. Why, you ask? He was on a quest, a quest for something he himself was uncertain of. He only knew it had to do with music.

Soon he reached the town's bulletin board, a place where advertisements, wanted posters, and the like were posted. He stopped by for a brief moment, not sure what he would find. Skimming through each piece of paper, his eye suddenly caught the word "conductor" in bold letters. Immediately his attention was drawn to the paper and he slowly read the words before him, WANTED: CONDUCTOR TO DIRECT A GROUP OF TALENTED ANGELS FOR THE GLAUCHAU ORCHESTRA.

Amazed at how this had practically landed in his lap, he quickly jotted down the name of the contact person who lived on the west side. Walking and half-running, he arrived at the man's house short of fifteen minutes, a record speed. He knocked on the door and a middle-aged man answered. They went through the usual introductions and finally began discussing the real reason for Karl’s visit. After some time of Karl describing his previous experience with music, the man agreed to allow Karl a shot at heading the orchestra. There were only eight as part of the "orchestra," a much smaller number than Karl had anticipated.

He was accustomed to orchestras of one hundred or more people, not a measly eight. This should not even be considered an orchestra. Uneducated country bumpkins, Karl thought to himself. However, since he needed something to fill his time and was dying to use his talent somewhere, he accepted the offer. He would meet with the group the following day around four in the afternoon. Feeling confident and satisfied, Karl left the mans house with a smile on his face.

Before proceeding with the remainder of the story, it must be mentioned that Karl was not an ordinary angel. He had special powers that very few were blessed with. Karl had the ability to turn living things into stone, paper, metal, or whatever other inanimate object there might be. He could use this power for good or evil. So far, he had used it only for the good and benefit of others (i.e. when he turned the lion about to attack his brother into a stone statue) and had sworn never to use it for his own gain. He respected his specialty and took it seriously.

The next day dawned bright and early and Karl awoke to begin his work day. He had some harvesting to do and then he would go into town to sell his produce before going to meet his new pupils. Excitedly, he quickly worked throughout the day, dreaming of himself on a stage with thousands of people watching. The successfulness of an orchestra was not based on the talent of the players but rather on the efficiency and aptitude of the conductor. The conductor was vital in bringing everyone together in harmony.

Two o’clock rolled around and Karl packed up his belongings and set out for the short trip to town. He sold his merchandise at the market and then proceeded towards the meeting place, an old church. He was the first one there but after about five minutes, one stout angel entered, carrying his cymbals. One by one, the angels arrived, the drummer, the trumpet player, the French horn player, the clarinetist, the panpipe player, and the accordion and mandolin players.

As soon as all had walked in, he gathered everyone together and introduced himself. In turn, each angel did likewise. He asked all of them to grab their instruments and on his key, to play a C note. As soon as he heard the atrocities pouring forth from each instrument, he knew his work was cut out for him. Determined to help all of them improve, he began teaching them the basics of playing with other people, how one had to not only pay close attention to his part but also to the part of others. This included tuning in to the harmony that was presented by the rest while playing one's own part. How much they had to learn! Karl wrapped up the session with a quick note on the next days meeting time. No matter what, his love for music took precedence over his love for solitude. He would see this to the end and they would all learn how to play beautifully. There was no failure in his book.

The group continued to meet each day at the same time and in the same place for four months. Karl was beginning to worry; only one was improving but the rest were all floundering. How could one practice for so long and not get any better? he wondered. He felt like he was wasting his time and energy teaching a crowd that could not learn. He did not want to give up but their performance day was looming ahead of them. It was only four weeks away and they still had trouble playing simple notes.

The next few days came and went, and still no one had made any real improvements. Karl began to get angry. Things were not supposed to happen like this; he was supposed to be a great teacher, one who could reach the naïve and amateurs. Another week passed by and then it was Friday with only two weeks left. This was the day when Karl exploded. Having begun the session in an exceptionally sour manner, things only progressed from bad to worse.

The clarinetist could not memorize her part, the trumpet player had trouble holding his note without squeaking, and the drummer could not keep the right rhythm. It was utter chaos. Finally, Karl lost control. He wanted it all to go away. He wanted to return to his cabin and stay there, apart from the ruckus. He wanted to cancel the performance and save himself the embarrassment that he knew was sure to come. And so, he did what he told himself he would never do. He used his power for evil. One by one, the angels turned from living beings into statues. No one would ever know what happened. He would go and hide in his cottage where no one knew he lived and he would forget all this had every happened. He would never return to the town of Glauchau but would sell his goods at another nearby town.

This would save him from the possibility of running into the middle-aged man. Admiring the silence and his handiwork, Karl walked between each figurine, noticing their smiling faces. He did not regret his action and was surprised at the satisfaction and lack of guilt that he felt. Oh well, it is for the best, he thought to himself as he calmly walked out the front door of the church and towards the direction of his lone cabin.

A few years later, during one of his strolls through the town of Zwickau, Karl noticed some window displays of German angel figurines. They had lately become very popular but he had never really looked at them up close and so he had no idea what the hype was all about. Curious, he made his way over to them and noticed there were exactly eight different kinds. In fact, they were the exact eight that had been in the music group a couple years back.

Next time you see these beautiful little ornaments, and are struck by the sense of beauty and harmony between them, remember that sometimes the silenced harp plays the sweetest song.