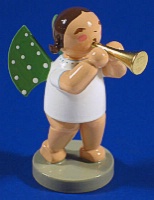 How many wing styles does Wendt & Kuhn have for the Angels? At this time there are only two varieties. On the Wendt & Kuhn Angels that make up the heavenly orchestra, the wings are now green with the 11 customary dots. The shape is of a triangle with a curved side for the back of the wing.

Not only are the orchestra Wendt & Kuhn Angels equipped with this style of wing but so are the Gold Edition Angels, the angels that are made as tree ornaments and a few of the other types of decorations that have incorporated Angels into their overall appearance.

The tradition of the Wendt & Kuhn Angels with the triangular shaped wings and 11 dots started 8 years after the first Wendt & Kuhn Angels were created in 1923. It gave this small little shop a distinctive look so they could be recognizable instantly. It is like a trade mark of sorts. But they were not always green as a main color.

During the Soviet occupation of East Germany, supplies of goods were not as it is today. There was always rationing and limits to what was available. Today a person can still find members of the Wendt & Kuhn Angels orchestra with pink, blue and red wings. They still have the distinctive 11 dots, only the colors vary. This can be verified that they are original Wendt & Kuhn Angels by the paper label on the bottom that has the WUK and East Germany stamp on them.

While not every figurine from Wendt & Kuhn is that of an angel. There are numerous ones made to represent humans. What they do have in common with the Wendt & Kuhn Angels are the faces and styling that are just alike.

I hope this answers the question of how many wing styles does Wendt & Kuhn have for the Angels, with some extra information that was thought to be important.