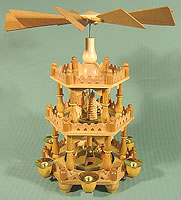 Christmas has its birthplace in the country of Germany. It was in this country, during the Reformation that the winter celebration of Christmas became a tradition, now shared around the world by Protestants, Catholics, and seculars alike. Before there was “Christmas,” people would celebrate the winter solstice. What made Christmas new and different was that it was started as a day to remember the birth of the Christ child. It seems that the reformer, Luther, who is attributed with starting Christmas, picked the time for Christmas to be celebrated almost arbitrarily. It is unlikely that the Christ child came to the world during the winter season, and yet, this is the time of year chosen to recognize the baby’s birth. As Christmas began in part in Germany, many of the Christmas symbols can also be attributed to this place. W can find them today in the traditional Christmas decorations like the German candle pyramid, Advent wreaths and calendars, wooden scenes and arches, handmade Christmas ornaments, and more. Many of these symbols stem from the religious heritage that this holiday has.

Baby in a Manger. This would be the Christ Child, or in German the “Christkindl,” this was the focus of holiday festivities, as evidenced by the Christmas Candle Pyramids. Christmas is a celebration of the birth of the Christ Child. The German candle pyramid depicts this. It is a wood structure that has multiple levels that rotate by fans and candles. As the candle pyramid rotates it tells a story. In many of the pyramids (also called candle carousels), the Christ child is at the center of the tower, on a lower level. The symbolism of the Christ child in the pyramid is that rememberance of this special birth is supposed to be at the center or the heart of our Christmas celebrations. Another way the baby is recognized in German Christmas traditions is through the street Chistmas markets or Weihnachtsmarkt, these were traditionally referred to as Christkindlmarkt. 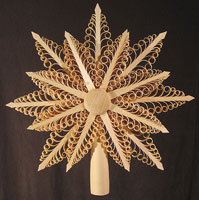 Star. In the Christmas story, the star precedes the birth of the Christ child and announces that the baby is about to be born. It also acts as a guide leading several wise men or kings to the birthplace. The star has come to represent hope during the Christmas season. In the first Christmas, it was the hope of the Christ Child arriving to earth. Today, Christians see the star in Christmas celebrations as a symbol of hope of Christ’s second coming or of a future of heaven. There are many types of stars found in ornaments, decorations and tree-toppers during the Christmas season. In Germany at Christkindl-markets one can find star ornaments cut as a backdrop for a scene (similar in design to the wood arches), there are also traditional 5 point stars. One type of star commonly created in the Erzgebirge Mountain Region of Germany, is the shaved wood star, these are beautifully handcrafted.

Stable or cave. This was the birthplace of the Christ child. As the account tells, the Christ Child was far from home when he was born, his mother having traveled for tax purposes. He was born in a stable, which is believed to have been a cave cut into the hillside. Many depictions of the birth show the baby lying in a manger, or a feed trough, surrounded with farm animals and sheep. In many German wood-carved scenes, the Christ Child is depicted inside of an arch representing the cave/stable. It was easy for the carvers from the Erzgebirge Mountains to visualize the Christ Child being born in a cave, as historically, many of them were miners before becoming wood workers. Today, many of the ornaments, backdrops, advent calendars, and pyramids, depict the Christ child in a stable or cave.

Shepherds and Angels. In the narrative of the first Christmas, as found in the Bible book of Luke, the first visitors that the Christ Child had following his birth were a bunch of shepherds who were told of the birth from a choir of angels. Today, we recognize the role that these characters played in the birth of the Christ child by having carolers at many Christmas events. Many of the Christkindlmarkts in Germany have carolers, which sings holiday songs to the crowds. In addition, there are life-size pyramids and advent calendars at some of the Christmas markets (like the one in Dresden) that depict angels and shepherd scenes. We can also find shepherds and angels as carved figurines in nativity scenes, ornaments and in pyramids.

Wise men or Kings. These were the second set of guests recorded visiting the Christ child following his birth. The kings or magi visited after following the star to where the Christ child was residing. The kings brought gifts with them. It is from their presents that we receive, in part, our tradition of bringing gifts to those we visit and love during the holiday season. The wise men are portrayed in a variety of Christmas decorations from Christmas ornaments, nutcrackers, nativity scenes, and candle pyramids. They are also subject matter found in many Advent calendars.

We can thank Germany for many of our rich Christmas traditions and emblems.