The word "Advent" means "the coming." It refers to a period of time where people of Catholic and Protestant faiths look back on the first coming of the Christ and forward at a "second" coming. Advent is a period of time preceding Christmas where one anticipates the birth of the Christ child and looks forward to Christmas day. Originally, the Season of Advent was celebrated for six weeks, beginning the last week of November. The acceptable period of Christmas shopping traditionally coincided with the older Season of Advent. In modern times however, the period of Advent is celebrated for the four Sundays before Christmas day and shopping fro the Christmas Holidays has crept earlier and earlier on the calendar, far exceeding the Advent weeks. In 2006, Advent began on December 3rd and the following Sundays, the 10th, 17th, & 24th would all have traditions acknowledging the day and counting down to Christmas.  In 2007 the dates of Advent will be: December 2nd ,9th ,16th ,& 23rd.

The period of Advent has been celebrated since the fourth century and has the custom of lighting a candle ring/wreath. There is a lot of symbolism in the Advent traditions. When one looks at the Advent wreath they will see four different candles, three of which are blue or purple and one is a rosy pink color. They are imbedded in a circular wreath of evergreen boughs and, in recent years, candleholders have been designed in wood to hold the advent candles and tell the advent story. The symbols of the advent wreath are as follows: 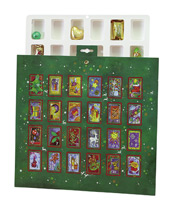 Since the beginning of the 20th century another Advent tradition has been born. This one is especially popular with children of all ages. There are twenty-four days leading up to Christmas, during the period of Advent. Colorful calendars have been made with little windows. The first of these was created in Germany. One window is opened each day leading up to the Holidays. Hidden behind the window in the card is an image. Sometimes these images remind the children of a part of the Christmas nativity. Other times the images remind the child of an action or a feeling that the Holidays bring, like giving presents or going for sleigh rides. Many Advent calendars offer objects instead of images. When the child opens the window, they may see a nut, reminding them of seeds and growth. Other windows may have small candies or Christmas ornaments reminding the children that the holidays are filled with joy.

The Advent is a time of anticipation, whether you use a candle wreath or a calendar to look forward to the holiday season. All of us enjoy something that we spend time hoping for; remember to share the spirit of joy and of hope during this Christmas season.