Germany is known for providing the candle pyramid, nutcrackers, and smokers to Christmas celebrations, but there are many other Christmas symbols, which stem from this country. Throughout Christmases past, people have incorporated numerous items into their Christmas celebrations. As many of our Christmas traditions (like the Christmas tree, Advent, ornaments, gift giving, etc.) come from Germany, many of Christmas’ symbols also originate from this country. Many of these symbols have meanings, which pre-date the celebration of Christmas but are more associated with winter solstice festivities. Mid to late December has always been a magical time as the longest day of the year occurs during this month. It reminds people of the drear that has been and of the spring to come.

Some of the symbols that stem from the ancient Winter Solstice celebrations are as follows:

* Evergreen Boughs for Decoration. Today Evergreen is used to add color to the cold dark days. When the rest of the forest, flowers and plants are in hibernation, the evergreen tree, holly bushes and mistletoe are green with life. These were used to decorate homes, symbolized life, and the regeneration that spring brings. Today you can find remnants of the evergreen and its importance in Ancient German Winter traditions in the form of wreaths and the Christmas tree. Many German ornaments are created with by shaving wood to create small fir trees. Also, the color green is prevalent in German Christmas decorations. 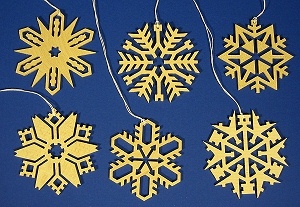 * Snow and Snowflakes. These are frequently associated with Christmas. A song has even been dedicated to the desire for a “white Christmas.” Snow is used traditionally to represent purity and winter. Today, one can find numerous Christmas ornaments dedicated to the theme of snow. An expansion to the image of snow with the Christmas season is the creation of snowmen. These were typically made by family members working together and represent fun and jolly times. Also, German winter themed table linen gains inspiration from the delicate patterns of the snowflakes.

* Tannenbaum or the Christmas tree. As stated above evergreen trees and their boughs were first used in pagan winter solstice festivals. These included decorating trees. Later this was incorporated into Christmas during the period of the reformation. Today some more conservative denominations refuse to celebrate Christmas with a tree, referring to its pagan roots. Originally, it was an oak tree used to represent one of the Ancient Germanic gods, Odin. Later the fir tree was used as the habit of decorating a tree became associated with Christmas. In Germany, in order to preserve trees, boughs were cut from trees and were attached to an A frame or people created candle pyramids from wood, to take the place in their homes of the Christmas tree.

* Mistletoe. This plant has long been revered and thought to be magical. The Mistletoe plant is parasitic, which means it has no independent life structure or roots, it is dependent on a host for survival. Ancient Germanic peoples were amazed at the ability of this plant to grow from supposed “nothing” and thus associated the plant with fertility. Before Christmas became a popular holiday, kissing under mistletoe was thought to bind souls closer together, if they were already in a relationship, or bring them together anew. It was also considered impolite for a single maiden to refuse a kiss, if she were standing under mistletoe, and thus was used in early courting rituals. Today, mistletoe represents the love and camaraderie that we now associate with the Holiday season.

* Stars and Candles. Stars were seen through history as a wonder, as they brought light during the night and could best be seen on cold, moonless evenings. During the month of December, when the nights are the longest in the year, the stars became a source of hope. Stars and candles (representing stars) have been used in winter celebrations throughout history. During the reformation, candles were added to the Christmas tree to represent stars. The star also is known in Christian Christmas traditions as a sign of hope, not for the arrival of spring or the new life of another day, but for the arrival of the Christ child. Today, Christkindl markets are setup throughout Germany and the world as markets to purchase Christmas goods during the cold long winter. Many different types of stars can be found at these, incorporated into candle pyramids and as handmade German Christmas ornaments.

* Osterhase – This was the first spring rabbit, what is modernly known as the Easter bunny. Originally, it was seen in the pagan spring festivals or “May Days.” Today, this perky bunny has been adapted into the celebration of the Christian holiday of Easter. Throughout the Erzgebirge Mountains you can find carved bunny figurines and ornaments celebrating the new life of spring. 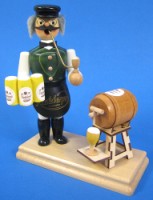 * Beer – This beverage has a long history in German culture and tradition, it is no wonder that in many ways it has become a symbol or an icon of German culture and can be found as mascot in many German folk crafts, like the renowned German Smokers. Beer has been made, traded and consumed in many forms and references to the beverage date back to the time of the Sumerians and Ancient Egypt. This drink was standardized and thus perfected under the Reinheitsgebot, or alcohol purity law put into effect in Bavaria, Germany back in the 15th century. From this time forward, Germany became a prime exported of this beloved brew and is incorporated into the German Oktoberfest. Many comical German smokers are dedicated to depicting scenes of pubs and the camaraderie of a shared drink.

* Gnomes – Fairytales involving these little creature originated from the Erzgebirge or Ore Mountains of Germany. According to legends these little men helped miners discover ores and other treasures hidden in the earth. As they are known for being creatures of the earth, these little men are most commonly found guarding gardens and the like. However, they are also the subject of many German Christmas ornaments, smokers, cuckoo clocks and figurines. They can also be found as the subject in holiday themed German candle pyramids.