Christmas Ornament History of The Nativity

Christmas Ornament History of The Nativity 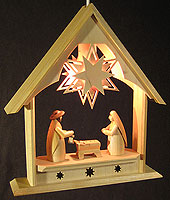 Stable - The stable is considered the frame of the Nativity Christmas ornament. This is where the birth of the Christ child is documented to have occurred. There are some who believe that a cave was actually used but the stable is what is recognized as the birth place. The Gospel details how Mary and Joseph were traveling and it came time for her to deliver Jesus. They tried to find a room at the inn, but because of the annual census many were traveling and there was no empty rooms. The innkeeper provided a stable for them to stay in and this is where Mary delivered.

Manger - The manger is where the Christ child was laid to rest after his birth. A manger is typically used to hold hay for the animals in the stable.

Baby Jesus - Baby Jesus is the focus of the Nativity Christmas ornament. His birth sets the scene for the nativity.

Mary - Mary is the Virgin mother of Jesus. She conceived Him through Immaculate Conception fulfilling prophesies told throughout the Bible.

Joseph - Joseph is the husband of Mary and the earthly father of Jesus. Jesus was the Son of God, but Joseph married the Virgin Mary and took the role of father on earth. 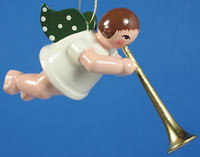 Shepherds - There are usually at least two shepherds depicted in the Nativity Christmas ornament. The Bible tells that there was shepherds guarding their flock the night of the Christ child’s birth. An angel appeared to them and told them to not be afraid, but good news and glad tidings. The angel then tells them of the birth of Jesus and the shepherds then make their way to the stable to see this miracle. Often times there is a boy shepherd that carries a lamb on his shoulders. It is speculated that this is symbolic of the ritual of offering using lambs especially in honor of royalty or High Priests. Jesus is referred to as God’s "Offering" to man, so this piece may be used as symbolism for the offering or just another shepherd character.

Sheep - The sheep are usually set up to accompany the shepherds at the Nativity. Many talk about the symbolism of Jesus being called the Great Shepherd or Lamb of God.

Three Wise Men - The Gospels talk about three "Wise Men" from the Orient that saw a bright star and followed it because of a prophesy of a great King being born under such a star. They brought with them gifts of gold, Frankincense and myrrh. The gifts were typically given in a royal birth. This is symbolic because Jesus was called the King of Kings. The three wise men journeyed on camel to the place of the Christ child’s birth. Although the three wise men are shown in the Nativity Christmas ornament, it is believed that they actually didn’t appear until Jesus was about three years. This time is based on the distance that the wise men had to travel while following the "Bethlehem Star".

Camel - One or two camels is usually present in the Nativity Christmas Ornament as this is what the Wise Men used to make their journey.

Mule - A mule is typically in the nativity as this is what Mary rode on into Bethlehem since she was pregnant and about to deliver. 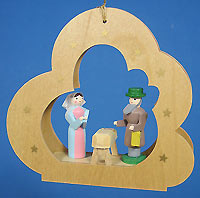 All over the world Nativities are used as Christmas ornaments and many countries have their own versions of the Nativity scene by use of different plants or "furnishings". The main characters are always the same. The Nativity is one of the most recognized and sought after Christmas ornaments simply being the symbol of the reason for Christmas. A simple scene that plays out a moment that was pivotal in the Christian belief of the Son of God being born on Earth. This moment is captured in the Nativity Christmas ornament and regardless of design or medium, there is no denying the significance of each character and each piece to show that moment in history.