Where Did the German Christmas Pyramid Come From

Where Did the German Christmas Pyramid Come From?

German pyramids or Christmas pyramids are wooden handicrafts that are made by skilled artisans in the Erzgebirge mountain region of Germany. This community of artists, woodworkers, glassmakers, and craftsmen has been making original handmade arts and crafts for hundreds of years. In addition to German pyramids, this area of Germany is world famous for their unique style of craftsmanship in making German smokers, nutcrackers, cuckoo clocks, glass Christmas ornaments, wooden figurines, and a variety of other handmade German arts and crafts. The origins of the German pyramid, as with all of the wood crafts made in this particular region of Germany, has a very interesting history and knowing its journey makes owning an original German pyramid even more special.

Many of the Christmas traditions that we practice today came from Germany and have been celebrated around the world for centuries. From the Christmas tree to Christmas ornaments to Santa Claus, Germany has been the main contributor to how we celebrate the Christmas season today. The first German pyramids are thought to have been created as early as the 16th century and many people believe that the German pyramid design was inspired by the shape of the Christmas tree. When an English monk traveled to Germany in the 7th century, he used the triangular shape of the German fir tree to explain the significance of the Father, the Son, and the Holy Spirit. As a result, Germans began placing Christmas trees in their homes as a symbol of their Christian faith, but at first they were traditionally hung upside-down inside the home. Over time, the trees were turned back around and the traditional Christmas tree was born.

This triangular shape with the wider base at the bottom and the point at the top was essential to the development of the first German pyramids. In order for the heat from candles placed at the base to rise to the top without catching the entire structure on fire required that the bottom be wider than the top. The pyramid shape was the perfect solution for this problem and the traditional German pyramids took their shape.

During the 18th century in the Erzgebirge region, this area of Germany was a thriving mining community. For centuries the Erzgebirge mines produced everything from silver to tin to even uranium. Miners who worked far below the surface of the earth for most of the day used to make their own handmade German pyramids to take with them into the mines. These simple versions of the traditional German pyramids were usually made of several sticks tied together in a bunch and placed at the top of a simple pyramid shaped base with several candles sitting at the bottom. The miners called their German pyramids "light racks" or "light stocks" and they brought them into the mines with them to make sure that there was enough fresh air inside the mines because candles will not burn properly without a fair amount of oxygen. They were also a simple reminder of the warmth and light that waited for them outside the mines. 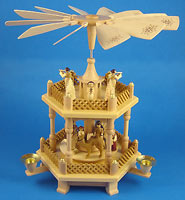 Little movement was involved in these early versions of the German pyramid, but over time they became more animated and complex in their designs. The miners were constantly improving upon the earlier designs by adding new parts to their German pyramids and removing unnecessary ones. They added wooden rods to hold the sticks up top in order to spin, then a solid dish at the bottom to hold the candles. The slatted wood fan design was eventually developed allowing the heat from the candles to spin the German pyramids around more easily. Over time, the miners began decorating their own German pyramids with beautiful hand carved wooden figurines. These decorative German pyramids then left the confines of the darkened mines below the earth and began being used during Christmas celebrations inside the homes of the miners.

By the late 19th century, the booming mining business of the Erzgebirge region was nearly tapped out and the mining families that had lived in these mountains for generations suddenly found themselves struggling for a way to make a living. As mining productions began to dwindle, rather than abandoning the region for work in the cities or other parts of Germany, families who had been miners all their lives began producing their own handmade crafts and starting their own businesses. Because the region was so isolated from the rest of Germany, especially during the long, cold German winters, many traditional handmade crafts were handed down from generation to generation. These included woodworking, woodcarving, glassblowing, blacksmithing, decorative painting, clock making, and a variety of other skills. As a result, mining families became skilled craftsmen and began selling their wares throughout Europe. The area is now known throughout the world as being home to master artisans who create beautiful German pyramids, nutcrackers, glass and wood ornaments, hand carved figurines, cuckoo clocks, and other traditionally made German crafts.

Today, German pyramids come in a wide variety of sizes, shapes, and styles. Most German pyramids are religious in nature, yet many styles feature scenes from life in the typical German village or feature animal and wildlife themes. The German pyramid has become a traditional decorative household item that is displayed around the Christmas season in every German home. German pyramids are still handmade by the same families in the Erzgebirge region of Germany using the traditional methods that have been handed down from generation to generation.