Christmas ornaments were not always used as Christmas tree decorations. They have been found in various aspects of the holiday celebrations, before the tree became emblematic in family traditions. As with most of America’s Christmas traditions, much of the history of Christmas ornaments stems from Europe and more accurately from the holiday traditions of Germany. It is from this wonderful country that we have received the actual celebration of Christmas. Martin Luther, a figurehead in the reformation, was born and died in Eisleben, Germany. It was he who helped change the holiday celebration from Saint Nicholas Feast Day to ChristKindl or Christ child celebration, which evolved into "Christmas" and Christkindl markets. 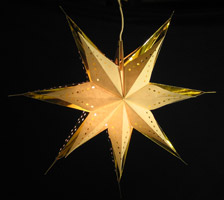 The history of the ornament, however, begins earlier and is most connected with Saint Nicholas’ Feast Day. In the legend of Saint Nicholas, the Bishop of Myra is said to have brought "gold globes" to a man as dowries for his destitute daughters. These were secretly hung by the fireplace or, another version states, placed into stockings. Later, when Saint Nicholas’ feast day was incorporated into Christkindl, or Christ Child, celebrations to become "Christmas" the tradition of giving gifts of globes, became known as gifts of Christmas ornaments. In early ornament decorations, the amount and craftsmanship of the ornaments one had was a sign of their wealth and societal position - much like the gold globes had been for the destitute girls. 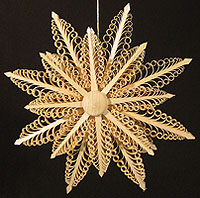 When the holiday had shifted, from Saint Nicholas’ feast day to Christkindl-mas (Christ child mass), legend states that Martin Luther wanted to bring home the story of the Christ child’s birth, how God had planned that from the beginning of time by incorporating two Bible stories into one physical item of remembrance. Today, we know that object as the "Christmas Tree." The evergreen tree was first used in plays depicting the story of Adam and Eve in Paradise. As trees were sometimes scarce, people would make an A-frame pyramid upon which to affix boughs of an evergreen, thus saving the actual tree. In the inside of the "pyramid" people would place figurines, originally telling the story of Adam and Eve and of their fall from Paradise due to sin, and later depicting the story of Christ’s birth, the future redeemer of sin and restorer of Paradise. Upon the boughs people would tie small candles, hang small wafers, and folded or cut paper ornaments - usually following the theme of the Bible story. It is from this that both the German Pyramid (or candle carousel) and the Christmas tree originated.

Christmas ornaments today are most traditionally hung from the boughs of an evergreen tree, just as earlier ornaments were hung from the pyramid/tree. The first ornaments were painstakingly hand-hewn. They were works of art made in the spare time that farmers have during the months after harvest and before the spring rains. Most of these were made of folded paper, shaved wood or twisted wire. Other early Christmas ornaments in Germany were foodstuffs, nuts, cookies, dried fruits, etc. As Christmas trees gained in popularity in Germany, one town in particular decided to begin making ornaments to hang on the tree commercially. That town was Lauscha, Germany, known for its glass factories. In the 1800s, they began to diversify in what they created, from marbles, flasks, dishware, etc. to creating more artistic Christmas ornaments. The first ornaments they created resembled items already hung on the trees (nuts, fruits, etc.) but as their popularity grew Lauscha began to create icicles, stars, bells, animals, angels, etc. They even began to create ornament figurines in the shapes of saints and famous political figures. These Christmas ornaments were made of glass that was skillfully blown from a long tube, and while the glass was still hot, it was molded and then hand painted.

The popularity of Christmas trees and the ornaments that adorned them did not become popular in the rest of Europe or the United States until the mid 19th century. England began celebrating Christmas with a tree under the reign of Queen Victoria, a very popular monarch, who married the German Prince Albert. The London News, in 1846 pictured the royal family celebrating around a decorated tree. Soon the Christmas tree became the rage of European society. Woolworth Five and Dime shops helped popularized ornaments and decorating trees in the United States. The U.S. already had pockets of Christmas trees used in celebrations, due to immigrants from various German kingdoms; these gained in popularity as the Holiday season become more commercialized. 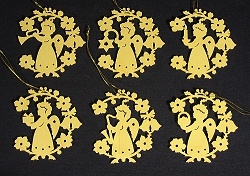 Today, it is a rare home during the holiday season which does not decorate their home in some degree with lights, stocking and of course, hanging ornaments upon a Christmas tree. As with the era of Saint Nicholas feast days, beautiful ornaments are still a symbol of beauty, of leisure time and of secure home. It is a shame that the era of sitting in the cool winter months, laboring over the creation of an ornament has declined, however, handmade ornaments from Germany are still available. Many of these are imported to the United States directly from the families in Germany that created them. You can find shaved and polished wood ornaments, cut wood ornaments, blown and painted glass ornaments. The craftsmanship found in a handmade Christmas ornament from Germany reminds us of a simpler time.