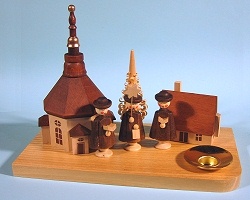 Wooden Christmas figurines have been handcrafted in the Erzgebirge mountain regions of Germany for hundreds of years. Using the same traditional woodcarving techniques that have been handed down through the generations, master toymakers and craftsmen today still create the special wooden figurines that have made the area famous around the world. Christmas figurines from this area are highly collectible and many serious collectors travel to Germany each year to add the newest figurines that are introduced to their collections. As with most of the handcrafts that come from the Erzgebirge region, such as nutcrackers, smokers, pyramids, and ornaments, the rich history and lifestyle of the German people is expressed in the Christmas figurines that are produced in this area.

The people of Germany are largely responsible for creating and carrying on many of the modern Christmas traditions that we celebrate today. As Christianity spread across Europe, celebrating the birth of Christ became more and more popular with each new generation and over the centuries many Christmas traditions were developed and handed down from generation to generation. The German people played a major part in creating and passing on these Christmas traditions due to their strong connection with Christianity and their relationship with their natural surroundings. Germans were one of the first ones to display the Christmas tree in their homes during the Christmas season and they made popular the practice of decorating the Christmas tree with ornaments, lights, baked goods, candies, and presents. Over time, the tradition of decorating the entire home inside and out became popular in Germany and around the world and the business of making handcrafted Christmas figurines, decorations, ornaments, and other items for the home was born. 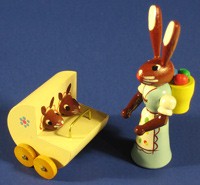 For Germans, making Christmas figurines and other handmade decorations is more than just a way to make a living, it is a way to express their Christian beliefs while also honoring the common man and the struggles that they have had to endure over the centuries.

In the Erzgebirge region particularly, life has been difficult over the years for these villagers. The Erzgebirge Mountains were once filled with natural ore materials, such as silver, tin, and uranium and the area thrived for hundreds of years as an important mining community. During the long, cold winter months, the area was largely closed off from the rest of Germany and mining production slowed, so the people of the area spent their time making wooden figurines, cuckoo clocks, and glass ornaments as a way of keeping busy. Once the mining industry began to slow down, villagers began selling their figurines and other handmade crafts to the surrounding towns and cities and eventually the mining industry ceased as the crafting industry took over.

It is important to understand the history of the area where Christmas figurines and other decorating crafts come from to understand the types of designs that are produced in the area. Because the Erzgebirge area was initially a mining community, light, faith, and family have always been important themes seen in their figurine crafts. As the miners would make their way deep inside the mines each day to work, light became an important part of their lives. Miners would bring with them their own candles to see with and eventually began carving unique and interesting candle holders and pyramids which would provide them with much needed light and a hopeful reminder of the light that awaited them outside on the surface.

As candle holders and pyramids became more and more intricate, miners would add personal details to theirs with hand carved figurines and other unique detailing. Mining was and still is dangerous work and many miners relied on their faith to keep them safe and gave them hope that they would soon return to their families outside of the mines. This can be seen in the many popular figurine designs that have been handed down over the centuries. Angel figurines, nativity figurines, and other uplifting and positive symbols representing faith and hope have been seen in figurine designs ever since.

As collecting handmade Christmas decorations became more and more popular, so too did the development of handcrafted Christmas figurines. Rather than just decorating the Christmas tree, people were decorating their entire homes with lights, wreaths, and free-standing decorations, such as figurines. Families began creating and displaying Christmas nativity scenes in their homes, so wooded nativity figurines became a popular item to collect. Using the natural woods from the surrounding forests of the Erzgebirge region, artisans began carving entire collections of figurines from a single piece of wood. Skilled artisans would carve out the baby Jesus, Mary, Joseph, the Wise Men, shepherds, and animals into little figurines that could be displayed as a set. Today, you can also buy entire figurine towns with churches, houses, carolers, trees, animals, and other wildlife figurines to display at Christmastime or all year long.

From the very simple to the very intricate, hand carved Christmas figurines from the Erzgebirge region of Germany are now available for collectors around the world. Many of the families of the region are world famous for their unique and highly collectible figurine designs, such as Wendt & Kuhn, Mueller, and Dregeno. These family artisans have been creating handcrafted Christmas figurines, ornaments, and decorations for hundreds of years. They have passed down their traditional carving methods and figurine designs for centuries. So, if you are going to start a collection of fine hand carved Christmas figurines then you should get it from the Erzgebirge artisans who have been making their figurines for generations.