There are numerous icons or images commonly associated with the holiday that we all love - Christmas. These icons are varied in their history and their importance in various cultures. Most traditional holiday icons, like the tree, Santa and his sleigh, nutcrackers, snowmen, etc. gain their roots from the Christmas festivities of Europe and Germany like a ChristKindlMarkt. Today, we can find German crafts made with the themes of these icons in stores and import these artworks directly from their home country.

One of the most varied holiday icons is the Christmas Star. Several forms of stars have been incorporated in the Holiday celebrations and can be found as Christmas ornaments, lit tree toppers, accessories in German pyramids or candle carousels & in nativity scenes around the world. Martin Luther, the German Reformer, even referred to stars in his use of lights twinkling, and tinsel on the Christmas tree. 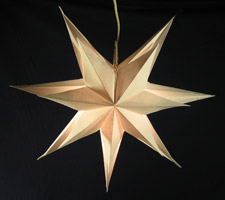 The association of stars with Christmas comes originally from the Biblical account of the birth of the Christ child. Here it is said that Magi (or Eastern Kings) came to visit the child, and were led by a star to Bethlehem, the birthplace of the Christ-child. Today, the arrival of the star to the Magi, and their anticipation for the Christ-child is remembered with the Advent Season, where we anticipate the Christmas Holiday. There is even a Christmas hymn written in the mid-1800s by John H. Hopkins paying tribute to the "Star of Bethlehem" and the Magi who sought it:

It is easy to determine how the star became a central theme in holiday celebrations as Christmas is celebrated in late December, close to the winter solstice, or the longest night of the year. During this time of year, stars are a source of light and fascination during the long, dark winter months. Families wanted to capture this warmth and light and began to incorporate stars into their Christmas ornaments, window hangings and tree toppers.

There are several different types of stars displayed during the holidays, including the five-point star, the star of David, the sebnitz star, the Moravian star, amongst others. The most popular form of star, the five-point star, was introduced to ornaments early on and it was a favorite among the decorated cookie ornaments hung on Christmas trees dating back to the 18th century. It can be found modernly in numerous Christmas ornaments, including the one to the left made in Germany of carved Linden wood. 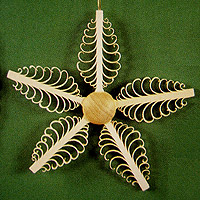 Another form of star, the Star of David is currently associated with the celebration of Hanukah. It has six points and resembles two intertwined triangles. The Star of David has been adopted as a sign of Judaism, and is gifted in the form of Christmas ornaments and other trinkets, during the days of Hanukah. This six-pointed star is also used in Protestant Christmas celebrations as a reminder that Christ was a Jew and in recognition of Christianity's Jewish heritage. 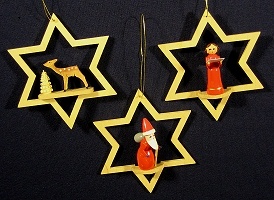 The seven-pointed star, also called the Sebnitz star in reference to the location of the German craftsmen who have popularized this star, is more rare. This star is made of intricately folded and cut papers. During Christmas celebrations, this star is backlit with a candle or light bulb, causing the papers to glow. It signifies the light of Christ in the world and the warmth of the holiday season. One of the most fascinating stars is the Moravian star. It is created with more than 16 points from all directions. Originally, it was created as part of a geometry class in a boys boarding school and later, following the first world war, was produced for sale as Christmas ornaments in Herrnhut, Germany, by cottage artisans. Like the Sebnitz stars, these were originally made from paper and illuminated from the inside, or painted with two tones to imply a star-burst. Today, there are Moravian communities and churches in Germany and around the world that create these beautiful 3-D star ornaments as reminders of the birth of the Christ Child. 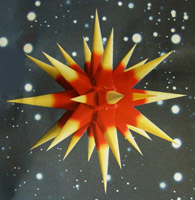 Stars are a predominant theme with the Holiday season, reminding us that in the dark cold winter months there is joy in Christmas. At Christmas Markets, or Christkindlmarkts, around the world, we can find stars in handmade decorations, in German Christmas ornaments and as accents to numerous holiday traditions. So, during your celebration of Advent and in the days preceding Christmas, include a star into your traditions and remember to share the light & joy of the holidays with those you meet.