How my Wendt Kuhn Angels Survived the Fire

How my Wendt & Kuhn Angels Survived the Fire 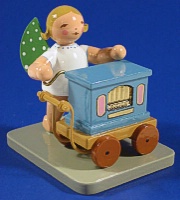 I always have my Wendt & Kuhn Angels out during the Christmas and Easter celebrations of our Lord Jesus Christ. The rest of the time I careful place them in velvet lined box to help protect them from the elements. This is something I learned from my grandmother.

My grandmother has been collecting Wendt & Kuhn Angels since she was young. The first ones she obtained still look as new as the others in her collect despite being 60 years apart in age. She told me the secret was to only have them out on special occasions. This would be the best way to keep them looking like new.

She told me while her collection could be cleaned with soap and water; they never have had the need to. This is because she always took the time to place them away after each celebration involving Jesus. She said it was out of respect for Him.

This always made sense to me so I did it with all of my Wendt & Kuhn Angels too. Not only did I place them in a protective box, but I then placed that in a plastic bag and inside another metal box just as extra security against the elements. For you see my father smoked. I did not want the tar and other debris from his smoking to leave deposits on my Wendt & Kuhn Angels. I then placed them down in the root cellar for safe keeping.

I was really lucky I had prepared their storage so well last month when the fire broke out at my home. They say the fire started from one of my father’s cigarettes, but we will never know for sure. What I do know is that even after the fire, smoke and water to put the blaze out covered my home, I needed to see if my Wendt & Kuhn Angels had survived.

It was several days after the blaze that I was allowed to return to our home and search thru the debris. With a little help from my older brother, I made my way down to the root cellar and found the metal containgthe Angels I had so carefully placed away for safe keeping. We took the metal box up and out of the cellar. I noticed just a little damage to it because a beam had struck it during the fire. I cleaned up the outside and then opened it up.

My prayers were answered along with the good planning by myself; all of my Wendt & Kuhn Angels were undamaged. The plastic bag had protected them from the moisture and the metal box had the strength it need to withstand the falling debris of the fire.