Our Fascination with Angels

Our Fascination with Angels 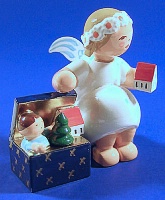 Our fascination with Angels began long before they introduced the shepards to Jesus Christ just over 2000 years ago and the inspiration behind the creation of the Wendt & Kuhn Angels. One thing that has been consistent over time is that God has always used the Angels to send a message to his followers. What is known about Angels is that we actually know very little about who they are except that they are all connected to God.

In the Bible, there are between 294 and 305 different references to these Heavenly Bodies depending on the translation you are reading. What is also noticed is there are only 116 mentions of Angels in the Old Testament while the smaller New Testament has them mentioned 175 times.

While it is well know that the Wendt & Kuhn angels are not heavenly creatures, but merely representation of them in a visual manner that humans can understand. From the book Genesis they are simply described as revealing themselves in human bodies and in another Old Testament book Hebrews as "spirits". 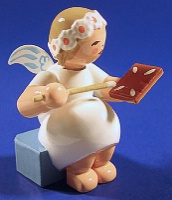 For those reasons alone the Wendt & Kuhn Angels and how they are created fit in nicely with what is projected, simple humanoid forms that are pleasing to the eye. Since Angels are created Holy and have no Sin they are considered to be in the perfect state of Holiness. While nothing man made can make that claim, there are many that feel the simple patterns and forms of the Wendt & Kuhn Angels help to create the illusion so we can appreciate them in the best possible manner.

One of the most useful purposes of the Wendt & Kuhn Angels is to help those that are suffering a personal pain or loss in their lives as a source of comfort. We all know that Angels should never be worshiped, but we can find inspiration in knowing they are all around us. Most believe they have a Guardian Angel that watches over us during our life time trying to keep us safe. 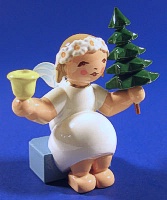 This concept has not been forbidden by God as long as all of our worship goes to Him along with all of our praises. This is where a fascination can come dangerously close to worship. Angel’s representations like the Wendt & Kuhn Angels should never be worshiped to or prayed to under any circumstances. The simple representations as humans are created only reminders of their existence and nothing more. They can and will give us hope because they remind us of God and all of his mercy.

The Bible says we are made in God’s image. Since this is true and Angels show themselves in the human form more than any other form, then statues and figurines of Angles do represent God's messengers.

The Wendt & Kuhn Angels are very good representatives of real angels because just like them, they are consistent in their structure and appearance. While the true nature of our fascination with angels will always differ from person to person, one fact remains; they are real Heavenly Bodies that are the messengers of God himself.