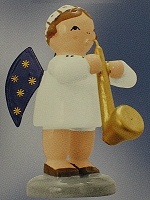 Once upon a time there was a German woodcarver named Dieter who lived in a tiny little house in a remote area of the deep, dark, forested mountain region of eastern Germany. Dieter was a miner by trade and spent most of his days in the darkened mineshafts thousands of feet below the surface of the earth, but during his off time Dieter spent his nights carving little wooden figurines.

Dieter did not mind working in the mines because he was not what you would call a social sort of character. Dieter was never a man of many words and most other people found him to be quite strange at times. When he did speak it was usually about work and this did not go over well with the other miners during their off time. You see, when you spend most of your days deep below the surface, covered in black soot, and always wondering if you are going to make it out alive, you will do anything to distract yourself from thinking about the hard life that comes with mining. This made Dieter less than popular and he was generally thought to be a dull, unimaginative sort of character in most circles. So, instead of hanging out with friends drinking beers after work, Dieter would go home and work on carving his figurines.

During one winter break, Dieter was carving his wooden figurines like he always did. The house that Dieter lived in was more than two miles away from the rest of the village, deep in the forest, so he was rarely disturbed by neighbors or friends, neither of which he had anyway. One night, as Dieter carved his figurines by the light of the fire, a loud knock came on the thick, wooden door of his home. Dieter actually jumped at the sound as it was so unfamiliar to him. While not afraid, he did find it quite odd that someone would walk deep into the forest, late at night, just to come visit him. Dieter got up, placed the wooden figurine he was working on to the side, and walked to the door. When he opened it, no one was there to greet him. Dieter stepped outside onto the small porch and looked to both sides of his tiny house, but found that he was alone. He thought for a moment that he must have imagined the knock and went back inside to continue carving his wooden figurine. However, when he got back to his seat, the figurine that he had been working on was no longer sitting there waiting for him. Dieter realized that something strange was going on and decided that some of the miners from the village must have been playing a drunken game with him. 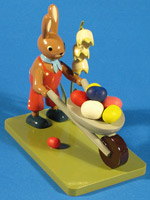 Suddenly, another loud knock banged on the door and Dieter ran to open it as quick as he could. To his surprise, as he opened the door, he again found no one there. What he did find, however, was too impossible for him to believe. There before him, as far as the eye could see, were all the wooden figurines that he had made since childhood, all standing there looking at him with blinking eyes and open smiles. Dieter could not believe it and rubbed his eyes as people do when they see something that incredible. When he looked again, the little figurines were all still there and some of them were gesturing for him to come outside. Not knowing what to do, he walked outside to see what could not possibly be there.

As he got closer to these living, breathing figurines, he noticed that several of them held in their tiny figurine hands the tools that they had stolen from his father so many years before. Dieter thought he must be losing his mind and just sat on the ground in disbelief. One of the wooden figurines, a little angel with a trumpet, climbed up onto his leg and gave him a little smile. Dieter did not know what to do, so he just smiled back and waited for what was to come next. The angel figurine then flapped its little wings and flew up to his ear. There the angel spoke to Dieter and told him how much they loved him and appreciated all the care he put into making each and every one of them. Dieter shook his head in stunned disbelief, but felt the tears that rolled down his face as he finally felt the love that had been missing from his life for so many years.

The little angel figurine then told Dieter that everything was about to change for him and the entire mining community. The angel said that the mines were soon going to be empty and the way of life that they had come to know would soon be gone. There was hope, however, and the angel figurine told him that the village could be saved, but only if he taught the townspeople his hidden figurine woodcarving skills just as his father had taught him. Dieter understood what he needed to do and thanked the figurines for their love and concern. The little figurines then waved goodbye and he could hear their tiny whispers as they disappeared into the dark forest.

The next day Dieter packed all of his woodcarving tools and went into the village to show anyone who was interested what he knew about carving figurines. At first, as you can imagine, the villagers were shocked to see that the man they had previously thought to have no interest in anything except mining was such a skilled craftsman of wooden figurines. Over time, however, as the mines dried up and the villagers needed to learn a new trade, Dieter became a well loved member of the community and was hailed as the man who saved the town from ruin. The villagers began making their own wooden crafts, like nutcrackers, smokers, pyramids, cuckoo clocks, and figurines and the village flourished. Dieter never told anyone of the figurines that came to him that night or of how he knew the mines would dry up, but he always made some sort of comment about little figurines hiding in the woods every time someone would mention that their tools had gone missing. Most laughed it off, but others swore they could hear little whispers late at night, deep inside the woods.