Santa and the Cuckoo Clock

Santa and the Cuckoo Clock 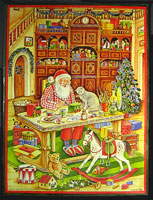 Christmas was quickly approaching this year and Santa and his elves had already begun their preparations for the season. Throughout the past years, children had always requested sleds or dolls or toys and adults simple things like clothes or other practical items. This year, however, over half of the requests were for cuckoo clocks. Santa had no idea what had started the excitement over these. The only reasonable explanation he could think of was that business was booming for the Schneider family. Any other gift Santa and the elves would have been more than willing to make. Any other gift but this one. Why? The fact is that Santa and the elves had no idea how the clocks were built. They had tried many times to dissemble them only to discover they did not know how to put them back together. Dejected they would drive over to the Schneider company factory and pay for the amount of cuckoo clocks that were requested that year. This year, however, Santa stubbornly determined that they would not pay companies for these gifts any longer. They would make them themselves.

He gathered the elves and told them of his brilliant idea. Since they had never figured out how to create the cuckoo clocks, they would steal the designs for them. They needed a mole, someone who would work for Schneiders and who could obtain the needed layouts. Santa picked Larson, one of his sneakiest and quietest elves. He knew that Larson could easily obtain the designs only because no one ever noticed him. It was the perfect plan.

The next night, ten elves left for the Schneider factory. They settled into their well-hidden positions and waited for the factory workers to begin their projects. They noticed that the workers each had a pendulum, the object that would initiate the cuckoo sound at each hour. They also had little wooden birds that they later inserted into the small door at the top of the cuckoo clock. Each worker also had a music box to play the tunes of the hour. And finally, they each had the pine cone-shaped weights that they hung from the bottom. As the elves watched the workers, they were amazed at the precision they saw. Carefully, each piece of wood was assembled and each nail hammered into place. Their creation already resembled that of a house. Soon they put the accessories of the house in their places, the dancing figurines in the rafters, the wood chopper and his axe, the tree, the waterwheel, and the clock hands. The elves finally realized what they had been doing wrong all along. They always added the pendulum and weights before attaching the music box. The factory workers waited until the very end to attach both items. The two elves who had brought supplies to make the cuckoo clocks on the spot marveled at how well the clocks turned out. They each snickered silently when they realized that it was the Chalet Wood Chopping Cuckoo Clock, one of the most requested cuckoo clock. They would wait until they were back home to test them. 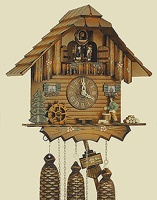 Waiting in silence until the factory workers had finished for the night, the elves finally came out from behind the boxes and headed home. They called in Santa and all the elves, eager to show them the fruits of their labor but also anxious that they would not work. Either way, they had the plans written down on paper. In case these failed, they could always try again. Holding their breaths, they hung the cuckoo clocks up on the wall. The two elves each wound their own. All eyes were on the clocks, waiting breathlessly. The pendulum began swinging. They all cheered but Santa quieted them and reminded them that they had to wait another hour to ensure that it would chime at the hour. 10 minutes passed, then 20, 40, 50, 57, 59.

Cuckoo, cuckoo, the bird came out of the trap door. All the elves shouted, jumping up and down with joy. Santa grinned and shook his head as he turned back towards his workshop.