What goes into the creation of a German Figurine? Germany is proud of its numerous artisans who labor to create handmade crafts, many of which can be found at Christmas markets or Christkindlmarkts worldwide. These figurines have personalities and can be discovered as characters in Cuckoo clocks, music boxes, nutcrackers, German smokers as well as characters found in candle carousels or pyramids. There are numerous steps that the craftsmen go though in the creation of each and every handcrafted figurine.

To make a German figurine the artisan first must locate a suitable piece of wood. Typically, the wood used would come from the Linden Tree, which is native in Germany. For example, the nutcracker to the right was made in the Erzgebirge, or Ore Mountains, of Germany, where Linden trees are plentiful. These mountains border the Czech Republic and have become known for the delicately labored over nutcrackers and figurines which come from artisans in this region. The first family to create a nutcracker, the Fuchtner family, is still making figurines in this region today. They choose the Linden wood as it is light in hue, almost creamy, similar to Basswood found here in the states. Linden wood is primarily chosen not only for its looks, but also for its softness and lightness. The Linden tree cuts and carves easily, making it a top choice amongst wood carvers.

The artisan would choose a block of Linden wood that does not have any large knots in it and which has a smooth grain to make the figurine. It is easy to see the buttery grain present in the Linden wood in the German smoker figurine . The Seiffen carver who made this bartender put a lot of thought into the piece of wood he chose and each bartender he makes has a different pattern of grain. It is evident that various types of grains add to the character of each piece.

The size of the block of wood is also important to consider when carving. For a German figurine inside of a German pyramid, the piece of wood can be very small, for some smokers and taller nutcrackers; the artisan would need to select a larger narrower piece of wood. He or she must also begin thinking of the pattern or general design that the figurine is going to take before his beginning carving. The girth of the statuette must be decided, as this would affect the size of the wood chosen. In addition, the carver must decide if the figurine is going to be from one piece or a compilation of multiple pieces. For example, if they were going to use a separate piece for the head or for a prop like a Santa Sleigh, the artisan would need to know in advance. The planning phase can sometimes take the longest.

The artisan begins working on the German figurine by finding the direction of the grain. He or she wants the grain to run vertically with the figurine. This gives the figurine more strength and makes it more durable. This is especially important when creating narrow appendages like arms or legs. For example, the nutcracker to the right has the weight of the frame supported on his legs. The grain is vertical adding strength. His arms, which come from separate pieces of wood, also follow the grain. 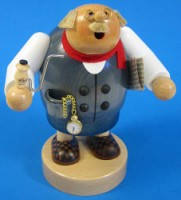 To begin carving the artisan notches out where the neck, waist and legs would be. He then affixes the wood to a lathe where the wood is rotated as the artisan uses a knife or chisel to create the traditional smooth spherical shapes found in the German figurines. The next phase is very important, the artisan will painstakingly sand the figurine removing any rough edges and encouraging the curved form to take shape. Once the wood has been sanded smooth, the character of the nutcracker or smoker figurine comes alive with several coats of paint. Each coat of paint is applied by hand and is allowed to dry fully before the next coat is applied.

The number of coats of paint or stain applied to the figurine depends on how dark or bright the artisan wishes to make the figurine. As you can see in this Opa smoker, which is "grandfather" in German, the grey paint is applied lightly so that the grain is still evident, while the slippers and pants have more coats providing it with a richer tone. Care is given that the colors do not bleed. This gives the figurines a rich, colorful, almost playful attitude. Many figurines are given eyes, blushing cheeks and noses during this phase.

The figurine is not nearly finished yet. The various parts must be glued or screwed together, in the case of a nutcracker, the pieces must be functional and a jaw must be lined up in order to crack hard nuts open. Lastly, the figurines are given non-wood props. This Opa was given a pair of glasses, snippets of hair to indicate that he is balding, and a small metal chain and pocket watch.

The German figurines created in the Erzgebirge region of Germany are imported around the world. These nutcrackers, smokers and toy figures are known for their character and playfulness. A lot of time and energy goes into the creation of these treasures. Many parody occupations, represent fairytale folk stories or nativity characters, while others are meant to symbolize historical figures. Most frequently these nutcrackers, smokers and other figurines are brought our as decorations for the holiday season and can be purchased at Christmas markets around the world.