This is a story about a Missing Angel I had. This was the cupid Wendt & Kuhn Angel that was kneeling that my Grandmother had given me when I was young. It was my very first Wendt & Kuhn Angel and I loved it so. I had always kept in on my night stand so it would be the first thing I would see in the morning when I woke up and the last things I would see at night after my prayers.

I was about 10 years old when I received it as a Christmas gift from my Grandmother. She told me it was her way of always being with me even when she was at her home and it represented the fact that I would always be in her prayers.

This was my daily routine until I was 12 and we had to move away. My father had been transferred by his company to Chicago. I was not sure if I would like it. It was going to be colder and I would miss the ocean that I was use to living near being from North Carolina. He told me that Lake Michigan could be my ocean because it was so big I could not see the other side. That was true but there were also no waves.

I had packed my Wendt & Kuhn Angels and properly prepared them for the trip. Since I received the first one a couple of years ago, I had saved up my allowance and bought a couple more. I really liked the new ones but the one my Grandmother gave me was special. My "cupid kneeling", I packed extra special and placed it in its own little box. Instead of placing it in the cardboard box with the rest of my items, I gave it to my mother so she could put it in one of the metal boxes that she used for some of the valuables and storage items.

That was the last I saw of my little Wendt & Kuhn Angel cupid for a number of years. Once we got to Chicago and unpacked, I could not find him. I looked everywhere. I asked my mother about the box she put it in and we looked for it. There were so many boxes to look thru and they mostly all looked alike.

The movers had placed the boxes in the rooms as they were labeled, but the little metal box was nowhere to be found. It was not until my Grandmother passed away did I bring up again about my missing Wendt & Kuhn Angel. I was 14 then and my thought of my Grandmother and all she had meant to me came flooding back. 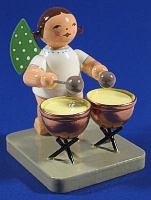 Like a miracle my mother finally remembered she placed my Wendt & Kuhn Angel in the same box as the old telephone bills. She thought the paper would give it some extra protection during the move. We went to the basement and in the storage area where the old records were, was a box still sealed from the move to Chicago. It was buried and took some time to find, but there it was. I just knew my cupid would be in there. I was right. So was my mother, my cupid was undamaged because of all the extra padding.