The German Tradition of German Pyramids

The German Tradition of German Pyramids

German pyramids have been seen in German homes for more than three hundred years now. They started out being simple little handcrafted wooden crafts used by miners in the mountain regions of Germany and over the years have become a Christmas tradition that German and American families alike participate in to honor the birth of Christ and to celebrate the joy of the holiday season.

The origins of the first German pyramids actually predate the German people themselves. It is thought that the original German pyramids were actually a Persian invention that was developed around the 7th century. This idea of spinning a windmill wheel around by harnessing the power of rising heat from small candles was brought to Europe, but it was not until the 16th century that German pyramids started showing up throughout Germany. In the 18th century, German pyramids really got their start as whimsical little handicrafts that would evolve into the intricately detailed works of art that they are today.

At about this time in and around the Erzgebirge mountain region of Germany, the booming mining business that had supported the village towns of that area for centuries was beginning to show signs of slowing. Miners of the area had fashioned what would be considered a crude and simplistic version of what we would call a German pyramid today. They would gather together some pieces of wood and form them into a pyramid type structure and place candles near the base. They would take their German pyramids deep down into the underground mines where they worked. These first German pyramids served a practical purpose as a simple way to make sure enough air was present inside the mines to breathe because candles need oxygen to burn properly. These early German pyramids also served as a gentle reminder of the light and warmth that awaited them back at their homes on the surface. 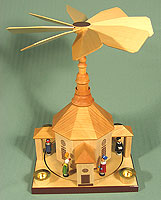 Over time, these miners began perfecting their German pyramid techniques and adding more artistic expression to them by developing the structure into a sturdier piece, adding multi-layered tiers, animated movement, and carving out decorative wooden figurines to place inside the triangular shapes. These more decorative German pyramids would sit in the kitchens or windows of their homes and would remain lit until the men returned from their dangerous work in the mines. These German pyramids started taking on the symbol of hope and prayer as families prayed for the safe return of their loved. As the mining business began to fade, the practice of creating handmade crafts began to take over in the area as the dominate means of financial support in the area.

Most German pyramids tell a story, particularly the ones with multiple tiers and moving parts. Religious stories, such as the birth of Jesus, are often told in the figurines that exist in the middle of the German pyramid. Most stories are told from the bottom to the top and represent a different aspect of the story being told. Some figurines spin around the German pyramid as the heat from the candles spins the wheel up top and others remain stationary, giving an added sense of depth to the stories being told within the German pyramid.

Many of the Christmas traditions that we celebrate in the United States were brought to us by German immigrants over two hundred years ago. This includes the tradition of the Christmas tree, ornaments, lights, stockings, and Christmas goodies like candy canes. German pyramids were also brought to the U.S. by German and Amish settlers who made their homes in and around Pennsylvania. Germans brought with them all of their Christmas traditions and displayed their German pyramids, oftentimes decorating them with evergreen branches, candles, and other decorations to remind them of the homes they left behind.

In Germany, the Christmas tradition of setting up the German pyramid and lighting it each night still continues today. Most families own a tabletop sized German pyramid that stands about two feet high, but the largest German pyramid in the world stands 45 feet tall, has five rotating levels with life-sized wooden figures spinning round and round, and is covered in lights. This giant German pyramid stands in the Christkindl Market in Dresden, Germany and is assembled each year to signal the start of the Christmas season.