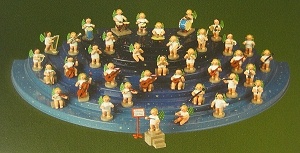 Billy was a precocious boy who considered himself quite clever and liked to play tricks on his mother, father, sister, and brother. One Christmas Billy thought he would hide the wooden figurines that made up the nativity set that belonged to his mother. While he was not a cruel boy by nature, he did enjoy a good prank every now and again. What harm could come from hiding a few little wooden figurines, he thought to himself. So, one early morning about a week before Christmas, before anyone else was up, Billy snuck out of bed and picked up the little figurines from the nativity set as they sat out on the fireplace mantel. One by one he snatched up the little wooden figurines, one of Mary, Joseph, the Three Wise Men, a little wooden sheep, and even the baby Jesus. Billy carefully put the nativity scene figurines in a canvas bag and ran outside to bury them beneath a bush in the back yard. Billy slipped back into bed and giggled as he thought of how he would blame his brother for the missing figurines.

At breakfast, Billy could hardly contain himself as he waited for someone to notice the missing figurines in the next room. As he waited to point the accusing finger at his brother, no one noticed the missing figurines. Well, Billy knew that he could not be the one to mention the missing figurines, so he waited patiently for the moment with giddy excitement. The school bus came and still no one noticed, so Billy spent the entire day in excited anticipation at being met at the door by his mother who would certainly have noticed her missing figurines by then. He could hardly wait to place the blame on his brother or even his sister, perhaps! It was the last day of school before the Christmas break and Billy loved spending the holidays coming up with new ways to trick and torture his brother and sister. Billy loved to play tricks, but always in what he considered harmless, playful fun. His siblings, however, did not always seem to appreciate his pranks as much as he did.

As the three children arrived home, their mother was waiting there as usual with their after school snacks. Billy glanced at the fireplace and saw that the figurines were indeed still missing from the nativity scene. He sat at the kitchen table waiting for his mother to say something about the missing figurines, but she only asked them how their day had been, instructed them to complete their chores, and then to play outside until dinner. Billy was really becoming anxious about someone noticing the missing figurines and had to force his mouth shut to keep from blurting it out himself.

Having to wait so long for someone to notice the figurines being gone was beginning to ruin his fun at the prank, so Billy decided to dig the figurines up and plant them where his sister would get blamed for the prank. So, after his chores Billy went back outside, making sure no one saw him, and dug in the spot where he had hidden the nativity figurines. To his surprise, however, the figurines were nowhere to be found! Billy panicked as he looked for the figurines he had so cleverly hidden beneath the bush, but then he realized that all of the bushes in that part of the yard looked very much like each other and began to wonder which bush he had actually buried the wooden figurines under that his mother had loved so much. Billy kept digging and digging looking for the place where he had buried the figurines, but he just could not seem to find them.

Billy panicked as he thought that perhaps a dog or another animal could have unearthed the hidden canvas bag. He remembered that the canvas bag he had placed the stolen figurines in was often used to carry his lunch and probably smelled like bologna sandwiches which could easily have attracted any number of wild animals. That part of the yard was also covered with leaves and the earth was soft, so it was difficult to tell which parts had been disturbed and which parts had not. Billy began to sweat as he realized that he might actually have lost for real the nativity scene figurines that his grandmother had handed down to his mother. 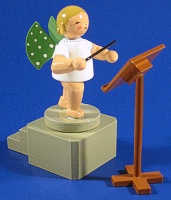 As he sat there trying to decide what to do, his mother yelled for him to come in for dinner. Billy did not know what to do. His father was home now and he did not want to face him when the discovery of the lost figurines came to light. His former excitement had now turned to fear as his simple prank suddenly spun wildly out of control. His mother called out once again and Billy had no choice but to go inside and hope now that they would continue to not notice the missing figurines. After dinner he decided he would go back outside and search for the figurines again.

At the table, everyone ate their dinner as usual and his mother fussed about how dirty Billy had gotten outside. He tried to eat quickly so he could be excused from the table when suddenly the moment he was dreading had arrived. His sister gasped and asked where the nativity figurines had gone. Everyone turned their heads to look in the living room where the figurines had sat on the mantel before Billy had removed them from their spots that morning. Billy could not look and was frozen with fear as his mother asked him if he knew anything about the missing figurines. Billy could not take it and immediately broke down as he told them how he just wanted to play a silly trick on them and how he did not know what had happened to the missing figurines. He promised to replace them as tears streamed down his face.

As he waited for his father to yell and his mother to cry, Billy looked up for the first time and saw that they all had smiles on their faces and suddenly everyone started laughing hysterically. Billy could not understand what they were all laughing at and just looked at them with stunned surprise. His mother told him to look at the mantel and when he did Billy saw that the figurines had been carefully placed back in their spots in the nativity scene. It seems that his mother was up early that morning and saw what Billy had done. While they were at school she retrieved the figurines from the yard and told the rest of the family of how they were going to play a trick on Billy, just like he always played on them. Everyone laughed at how cleverly they had pulled the prank off, but Billy did not seem to appreciate their prank as much as they did. However, he was relieved to see that the nativity figurines were never lost at all!