The German candle pyramid is an ornate piece of artwork, which uses the heat a candle generates to rotate a fan, which will then move delicately carved figurines and images around in a circle. There are several other names used to describe candle pyramids, including: German pyramid, candle carousel, lightstocks, Windrädchen and table whirligigs. All of these names describe an item that has a central rod with a fan connected to the topmost end. Wind or heat is used to generate motion in the fan. This motion causes the rod to rotate and in so doing, causes movement of figurine settings.

The history of the German candle pyramid or candle carousel stems from a pre-industrialization age. The German candle pyramid originated from the development of the windmill, the first of which were built in Persia somewhere in the 6th to 8th centuries. It is believed that the windmill migrated with the crusaders back home to Europe where they were used to pump water and as grinders for numerous things (wheat, seeds, etc.). It is from the construction of a windmill that the concept of a candle pyramid, where a fan propels lightweight wooden tiers to move, came into being. Often in a candle pyramid, the center of the tier in the larger levels will be stationary, containing a central figure (ex: the Christ child). Having the center stationary on larger levels allowed the pyramid to be lightweight, this is crucial for movement. The outer layer would turn around the central figure, while higher levels rotate as well. This gives the impression of a focal figure in the pyramid, which is perfect for depicting stories. They are beautiful decorations where the view that one sees while appreciating this piece of art, is constantly changing. These candle carousels, handcrafted primarily in Germany, have found themselves replicated most notably in Christmas and Paradise candle pyramids, but also have been found in birthday cake toppers, lawn whirligigs and other decorations. 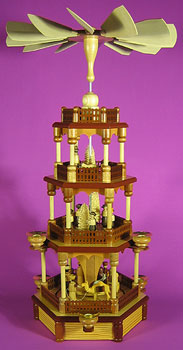 The German candle pyramid describes a tiered item, which usually has a theme (for example, Holiday or Nativity) and on each tier are figurines dramatizing the theme. The first German candle pyramids were used as visualizations to teach children Bible stories. It is said, that before books became prevalent in people's homes, that families would learn Bible stories from plays that were performed in churches. Parents later used the characters from these plays to create figurines, which symbolized different portions of the story. These characters would be placed in a various order on one to five tiers. Candles would then be lit below the fan in the pyramid and the candle carousel would begin to rotate, telling the story as the tiers revolved.

Some of the pyramids are simple demonstrating only one scene, while others are very complicated with thought out orders of procession. An example of this can be found in some Christmas candle pyramids. They tell the nativity story of the Christ child being born, of shepherds and magi (wise men) visiting the child and of angels blowing trumpets, rejoicing at the birth.

The earliest story being told on the candle pyramid is that of Adam and Eve and life in paradise. This story was typically told in the beginning of the Advent season and it is from this story that the classical shape of the tier originated. The pyramid is shaped to look similar to a tree, symbolizing the tree of good and evil, with each tier getting smaller and smaller as it approaches the top. Typically, there is also a ball at the top tier, symbolizing the forbidden fruit.

As the holiday season developed and Christmas began to be celebrated, the paradise story was replaced with that of the Christ child. In addition, children began to decorate their pyramids with tinsel and small paper ornaments. It is believed that the origination of the modern Christmas tree came from the candle carousels. Today, German candle pyramids demonstrate a wide variety of themes from Paradise, the Christmas story, to villagers caroling, but are mostly related to the holiday season. Many German families have the Christmas tradition of bringing out their candle pyramid at the beginning of the Advent.

The pyramids/carousels range in size and design with some having an A-frame exterior, some having one or two levels, while others have many tiers with multiple levels of candles operating the rotary blades. The largest candle pyramid can be found in Dresden, Germany. The city takes out its pyramid at the beginning of its Christkindl market celebration, called Striezelmarkt. Their candle carousel is over forty-five feet tall with five gorgeous lighted levels. The majority of pyramids, however, are under 2 feet tall and are used as tabletop decorations during the Holiday season. They are most frequently found at Christkindl markets or are imported from artisans around Germany.