The Miner in German Handcrafts

The Miner in German Handcrafts

The Erzgebirge Mountains have been renown for the detailed woodcrafts and toys, which are created in this region of Germany. These crafts have several recurring and at times overlapping themes. Many of these themes involve the celebration of Christmas, it is said that this holiday began here during the Reformation. Subject matter of these handmade crafts includes: miners, angels, the Seiffen Church, Kings, and Soldiers as well as a number of occupations. 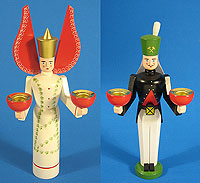 The miner is one of the characters, found in numerous smokers, nutcrackers, candle holders and even found in arches and pyramids, which has the longest history in this area. Back in the 15th century silver and tin ores were discovered in these forested mountains. In a few years, the largely uninhabited mountains were joined by miners who sought buried treasure.

Today, mining is a dangerous occupation, but the perils were even more hazardous during the medieval era. The mines would burrow into the earth and were generally only accessible in good weather, as rainy or wet days would guarantee flooding in the shafts. There were primitive pumping systems to remove water from the mines as well as bellows to pump clean air into the shafts. As the miners would tunnel further in search of ore, they would make use of the forests around them and cut large beams to support the shafts. Wood is still used to reinforce the passageways of mine shafts today. In spite of these basic safety precautions, miners had a low life expectancy. It is assumed that the themes found in their handicrafts stem from the lifestyle that they lived.

Mining was hard work and the shafts were inaccessible during the rainy, cold and wet wintery months. This meant that the miners were able to rest, recuperate, and enjoy some side hobbies. Many miners made use of the other resource that the Erzgebirge Mountains provided in the form of its Linden Forests and turned to woodcarving to occupy themselves. The subject matter that the miners used stems largely from their experience and their hopes. Mining is no longer the main form of employment in this region. However, the woodcrafts made today still tell the stories of the miners from lives past and can be found in German smokers, nutcrackers, candle holders and Christmas arches. Often the miners would carve caricatures of themselves, the angels who protected them, the gnomes who helped them navigate the shafts and find ores, the overseers and political leaders, their favorite pastimes of smoking and enjoying the moment with a pint of ale, and the churches, which fed their hearts and souls with hopes for eternity.

To depict themselves the miners would carve smokers, nutcrackers and candle holders showing them in their full-dress mining uniform. Although this outfit was primarily for guild meetings or demonstrations before royalty or government officials, the outfit was also practical for regular use. The uniform was not used until the mid-17th century. The outfit included a green cylinder helmet, usually with a candle propped to one side, black jackets and white pants with knee patches (which were necessary for long periods hunched over in a shaft). If the miners did not prop a candle in their hat, they would be pictured carrying a lantern or a candle in their hands. Many German miner figurines, smokers and nutcrackers can be found either holding a pickax, the tool the miners used to extract ore, and/or having a stencil of the hammer and pickax on their helmets. The foreman or miner supervisor’s uniform was gray and included a trumpet. This trumpet was used to make coded calls and orders through the tunnels. Today, the traditional miner attire is worn in parades throughout the Erzgebirge Region of Germany.

Through centuries of mining in the Erzgebirge Mountains, several legends began to develop describing protectors of the miners. The characters of these German legends can be found today in the carved woodcrafts (nutcrackers, smoking men, figurines, etc.) originating from this region. The protectors of the miners included Angels, who helped light the way, Gnomes, who helped guide the miners to ore and to safety, and the Seiffen Church that provided the community, surrounding and helping families when they eventually faced a loss. The angel character is most often portrayed coupled with the miner, “Bergmann und Engel” (miner and angel), as hand carved candleholders imported from Germany to around the world. The angel is holding two lights symbolizing the rescue to a miner in need of sight. Usually, the angel is wearing a cylinder helmet the angels helmet is gold and the wings of the angel are painted red or green. Another protector of the miners, found in German carved figurines, is the popular garden gnome. The gnome receives it’s legend from these hills. Rumor has it that these little earthy men would help miners discover the buried treasure of ores. As you can see from the traditional German smoker, in the character of a gnome, the lantern is present to aid in bringing sight and he is carrying a shovel to help dig for ore and for routes of escape.

The last icon that the miners would carve during those winter months is the Church in Seiffen, Germany. This church was a important element in the community, it was the glue which helped unite families. In front of this church, a Christmas Market would be held, now called Christkindlmarkt, as a place to gather as friends and neighbors and a place where the miners were able to sell the whittled goods that they had been making in their free time. Not only did the Church offer community, it also was a reminder of a life after death. As miners had a high mortality rate, this element was crucial, providing hope. Many miners so loved their church that they began to create candle pyramids (the early Christmas tree) in the shape of their tiered church. The candle pyramids and the lights that move the fans reminded them of the Christ child who brought hope into this earth.

Today, little mining occurs in the Erzgebirge Mountains, the silver and tin resources are all but depleted, even more modern mines for uranium are slowing their production. The Erzgebirge Mountains are now a reminder of a slower life from Christmases Past. As in the centuries of the past, families still gather to create wood crafts, smokers, nutcrackers, arches, candle pyramids, etc. The miner is still a common figurine. He is a reminder to us of the precious quality that life has, the need to cling to the light of life and to be thankful for the angels who watch over us.