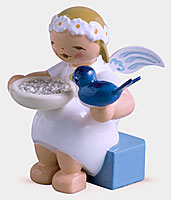 Are there any Wendt & Kuhn Angels that have special meaning? This is a question that will have a variety answers. The first part is yes for certain ones. The most obvious is the Angel orchestra that has been created with 69 different Wendt & Kuhn Angels playing nearly every kind of instrument known to man.

This is man’s interpretation of the heavenly orchestra that plays for God Himself. This is for his enjoyment and in unison when praise is being sung to Him by the Angels and humans alike. Some people actually believe they can hear this Heavenly music in the wind as it passes by.

The Wendt & Kuhn Angels that are also Christmas tree ornaments are said to be announcing to all of you visitors during the Christmas celebration that Jesus Christ the Lord has been born and we should visit Him and praise Him. This is just like the very first Christmas when Jesus was born in a manger surrounded by the animals and Angels alike.

The Margaritten Wendt & Kuhn Angels were inspired by sisterhood and how alike women are with Angels who take care of the needs of those around them. These Angels are making sauces, knitting, sewing, writing and taking care of animals. These are the Angels that take of the ladies that are taking care of their families. For all the mothers that are giving of themselves unselfishly, they too should be taken care of. These Wendt & Kuhn Angels remind us all about giving not only at Christmas but all year round just as Jesus did when walked the earth. 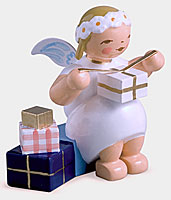 There are others that believe when you give away Wendt & Kuhn Angels, you are also giving a little of yourself away with them. It is like two best friends exchanging Wendt & Kuhn Angels to represent that neither will ever be alone again or by themselves with whatever the world and their lives throw at them. It can be like a source of strength that can keep a person going when it appears all odds are against them.

So next time you ask yourself are there any Wendt & Kuhn Angels that have special meaning, just remember it is really up to you and what you believe. There are meanings behind why they are made and the reasons they are given as gifts. Your special meaning is up to you.