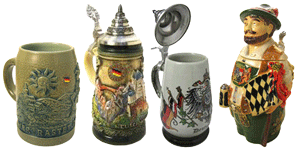 We have a great selection of standard and traditional Authentic German Beer Steins and Oktoberfest Beer Steins. The designs are very traditional, with a great focus on the dimensional designs they each feature. Many are lidded steins, but there are a few that are unlidded. These German Beer Steins are manufactured by the King Company in Germany.

Beer mugs and beer steins have one key difference; a beer mug does not have a lid. The covered lid was traditionally made of pewter, an easy to shape metal, which served more function than decoration. The lid kept the drink fresh and free from 14th century dirt and grime. Without proper sanitary conditions, a lid was the next best thing to preserve the integrity of the drink held within.

Decorations were added to the lid and now, entire scenes are featured creating a more decorative function and giving the stein it's timeless collectable status.

Stone Beer Steins or, Keferloher, in German, are traditional stoneware beer mugs. Keferloher is named after the village, Keferloh, where the unembellished beer mugs were originally made. Steins are also called Bierkug, which literally translates as, "Beer mug". We have a great selection of standard and traditional designs. We feature steins manufactured by the King Company.