Are the Wendt & Kuhn Angels really made of wood

Are the Wendt & Kuhn Angels really made of wood 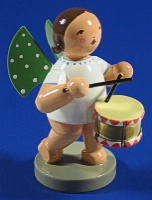 The question has been raised are the Wendt & Kuhn Angels really made of wood? The main reason there is a question is because of the finish and appearance of these wonderful little figurines.

The creation of the Wendt & Kuhn Angels is thoroughly thought out with an emphasis is on the finish of the angels themselves. Over half of the staff creating these angels are only working on this part of the product.

The advantage of using wood over porcelain is the finish itself and how the wood and paint join together. This is a better bond that will last the test of time. The wood also gives just a little so the cracks and chips that occur in porcelain figures can be avoided when they are handled.

The pieces themselves are made on an automatic lathe today. This allows for a consistent result each and every time the Wendt & Kuhn Angels are made. This has only been changed since the beginning by the way the lathes were powered. The very first ones were hand powered lathes. 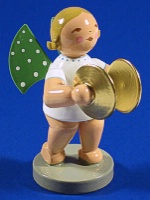 Wood has and always will be the choice for this German workshop. It all began because it was easier to work with than porcelain and the scarcity of materials when the first Wendt & Kuhn Angels were being produced. Wood was in an abundance in this southeastern region of Germany. Also the heat that is required to cure the porcelain requires a special furnace. Those materials were already taken by the war effort when this company started.

The process for the gluing of all the little part together has not changed much since the beginning. It is said the only difference this department has seen since 1915 is the number of the staff and the aprons that are being worn by them. The smell of pearl glue still emanates from this area of the shop. This glue is sometimes referred to as bone glue if you are interested. This glue had to be heated with hot water before it could be used. Luckily this has changed and a cold glue has been introduced because it is the only accepted one still available. 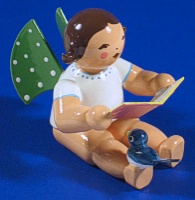 The ladies that assemble these little wooden Wendt & Kuhn Angels still sit around tables and go about their tasks much like it was 95 years ago when the production of them began. There is an elevator now to retrieve the pieces when supplies are needed instead of climbing the stairs into the attic like it use to be.

In answering the question are the Wendt & Kuhn Angels really made of wood, there was a little side track back into the history of this company. These are proud artisans that would never change the ways their Wendt & Kuhn Angels are made for any reason.