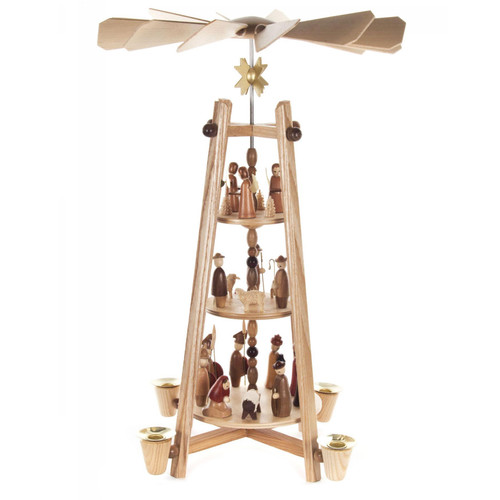 German Carousel Pyramid Traditional Style. This style of German Christmas Pyramid has 3 rotating tiers and is the way the pyramids were originally made over a century ago. Using the classic shape of a pyramid the Christmas story is told in tiers on attached to the central rod. The first level of this Traditional Style German Pyramid the soldiers following the 3 Magi to where Mary Joseph and Baby Jesus are. Note the unusual design of Mary kneeling in prayer. The Natural wood stains give a big impact to the scene. On the second level are a group of shepherds with their crooks and sheep and on the third rotating level are angels between shaved trees. A stylized Moravian star is above the pyramid with the paddle above that. Stands about 17 3/4 inches tall and uses 4 medium. candles (not included) to turn. Handcrafted in Seiffen Germany in the Ore Mountain region. Handmade by the Artisan Coop.

These German Pyramids have been delighting European families for generations, so continue the great heritage of family traditions.