Questions about Your Order?

View our Help Topics Below

How to Measure Candles
Please measure your existing candles before placing an order. Guessing the candle size is not an appropriate way to order candles. 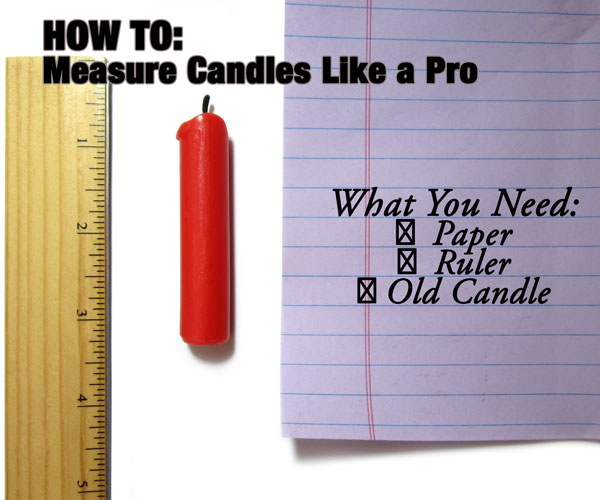 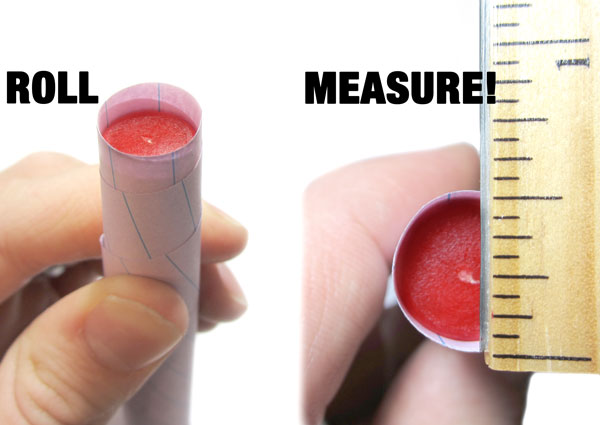 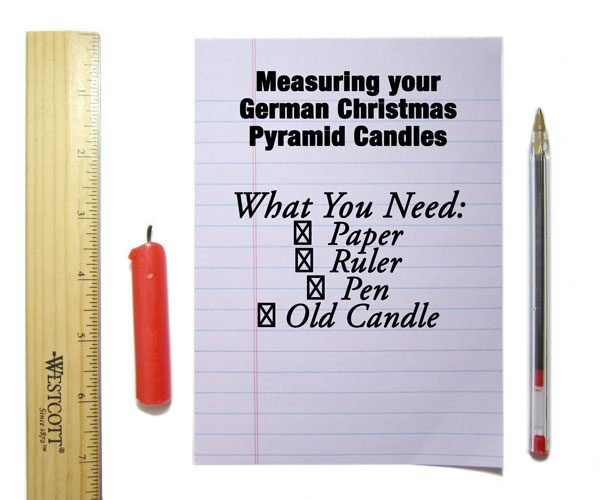 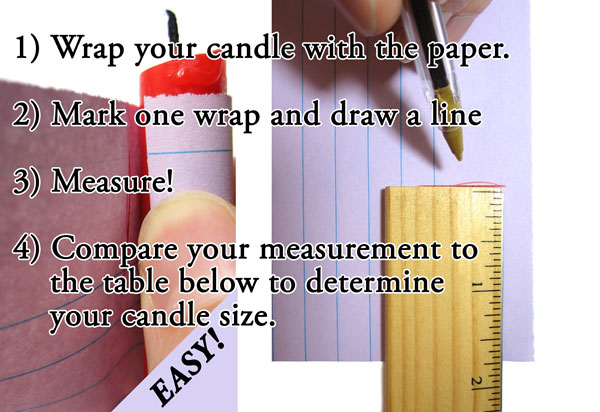 Measuring the circumference allows you more "wiggle" room because you can round to the nearest quarter inch!

How to measure candles for your Pyramid or German Candle holder.

All you need to do is measure the diameter or width of the brass candle cup.

To measure the diameter, take a ruler, center it on the brass candle cup holder, start at the number 1 then read across, don't worry if the brass cup tapers in, just measure to the end. 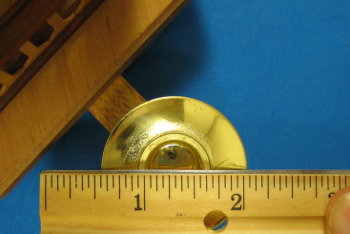 The photo above shows a measurement of 9/16 inches

It is that simple. If you have trouble reading the numbers, get either a magnifying glass or put on 2 pairs of reading glasses.

*How do the Pyramids come?

*What if my Pyramid isn't turning?

*Directions for Use and Assembly of Pyramids.

How do the Pyramids come?

What if my Pyramid isn't turning? 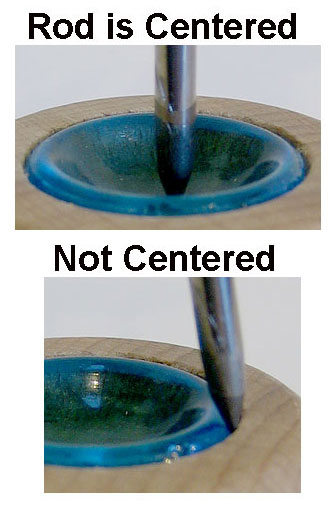 Using a flashlight, inspect under the lowest floor, look to see that the rod is indeed centered on the glass bearing. 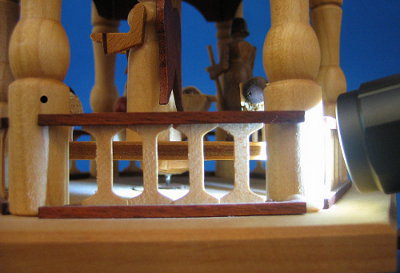 Second: Check the angle of the fan blades, they need to be at 30 degrees. So start out with the blades level to the floor, then turn them up to 30 degrees. Many times the blades are set to 60 degrees not 30 degrees and at that angle they may not turn the pyramid.

Third: Drafty Room: An "open layout" or large room will have air moving in it. Even though it doesn't feel drafty to you, it may be. Realize that the heat from the candles gets dispersed easily if room air movement is present. If your pyramid is not turning due to drafts, then you can move the pyramid to a corner of the room or you can add an additional candles - this means placing a tealight candle (one that is a glass container) near the pyramid to help give more heat. 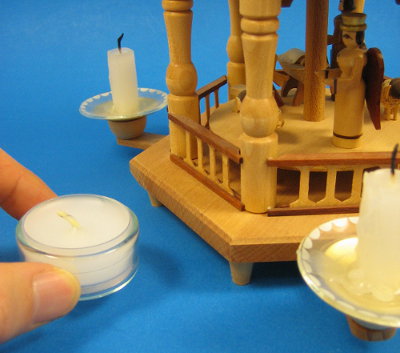 Directions for Use and Assembly of Pyramids

3. Place the paddlewheel assembly on the top point of the pyramid rod (axle).

4. Put together the paddlewheel (put paddles at about a 30 degree angle) and place finished piece on the point of the pyramid axle.

5. Insert candleholders into the holes in the base made for that purpose.

** Put NO pressure on the rod while it is sitting on the glass bearing! **

Use only pyramid candles (not too tall!).

The pyramid must stand firmly on a level horizontal surface and be protected from any drafts in order to function properly.

Should the glass bearing become scratched or cracked , it is usually possible to replace it. See our parts dept for a replacement

Do not burn candles in the mini pyramids (under 6-7 inches in height). They are there for decorative purposes only.

If you have any questions please do not hesitate to contact us.

How do I measure Pyramid Fan Paddles?
How to measure for replacing missing German Pyramid Paddles

If you have an existing hub, then you just need to find paddles for them, otherwise you will need a hub. 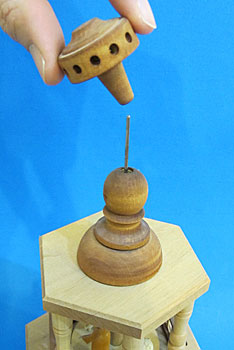 The hub has three measurements, the diameter of the small hole that the hub mounts onto the long metal center rod as shown here. 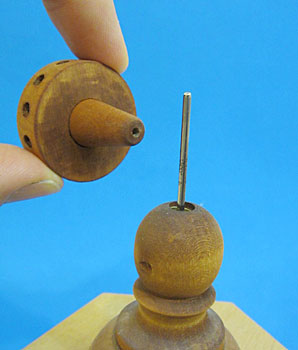 Measure the diameter of the metal rod, in this case it is 2mm. 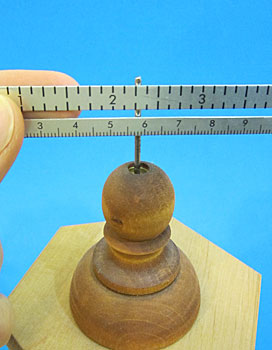 Measure the diameter hub rod hole, in this case it is 2mm. 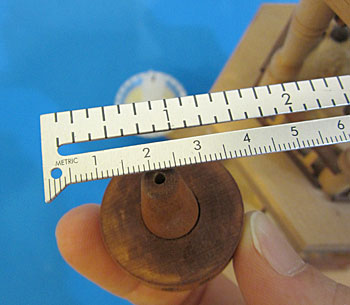 If you are missing all of the paddles then also measure the full diameter of the hub, in this case it is 1 1/8". 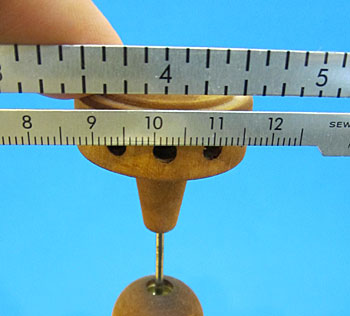 If you have a paddle and are looking to replace it, measure the length, in this case it is 3 7/8". 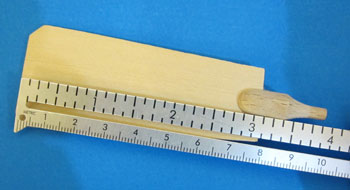 If you have a paddle and are looking to replace it, measure the diameter of the nub (this part will fit into the hub hole), in this case it is 4mm. 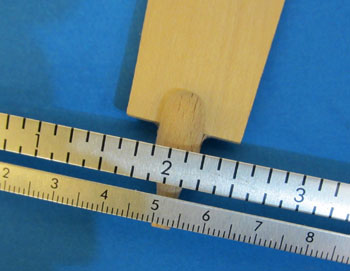 So if you measured correctly, the paddle nub will fit into the hub hole. 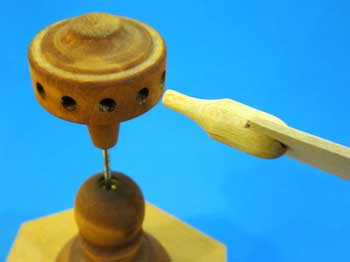 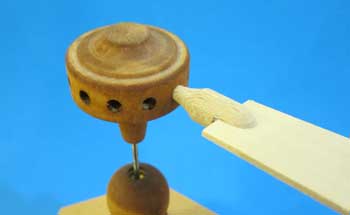 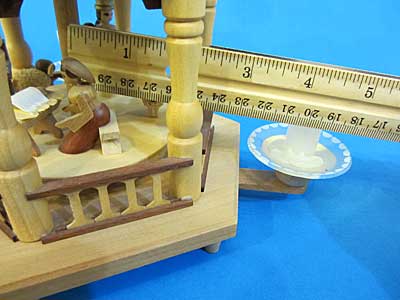 You want the paddle once sized correctly to stick out over and past the candle by about 1/2" or more. 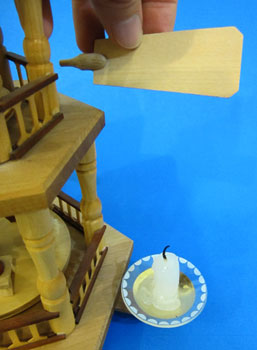 This way when the candle is lit, the heat will rise and hit the paddle pushing on it to turn. 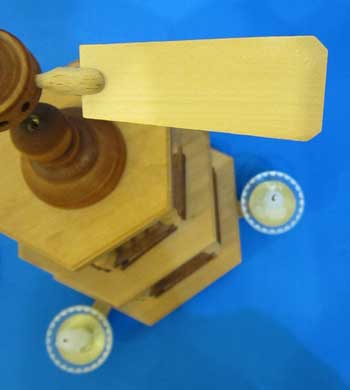 If you need a hub and paddles, measure the rod, with that measurement find a hub that will fit that rod, if the rod is 2mm, then the hub hole will need to be 2mm. Then measure the hub paddle hole, in the example above it was 4mm, so you will need a paddle that has a 4mm nub.

Paddle size conclusion, the nub is 4mm and the approximate length is 3 3/4", if in doubt it is better to get a slightly larger paddle rather than a smaller one. 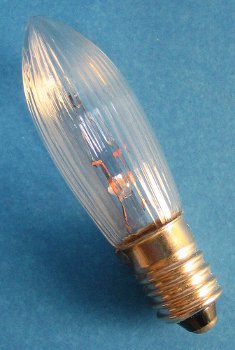 We have a few different sized bulbs including:

So to figure the correct bulb, you will need to know how many bulbs there are, once you know that it's easy: